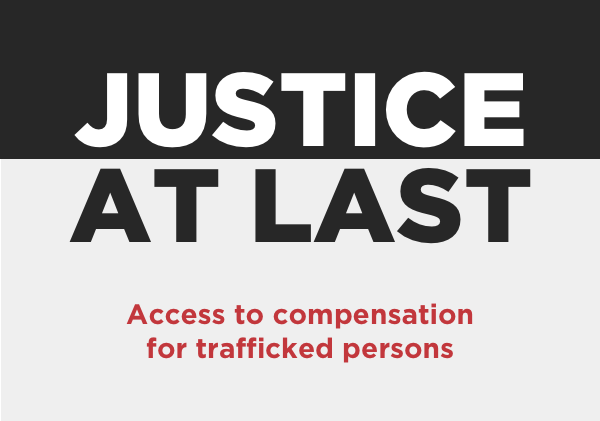 Most European countries have legal provisions for victims of crime to claim compensation or to otherwise be compensated for material and non-material damages. However, even when the legal framework is in place, the rights of people who were victim of trafficking or other crime to actually seek and obtain compensation remains difficult or impossible to exercise in practice.

Evidence shows that very few victims have the information and the means to seek compensation. Even fewer actually receive a compensation payment. Although compensation is an internationally recognized right of trafficked persons, there are many barriers that prevent them from accessing this right. As long as barriers to compensation exist, European Governments fail to fully implement their obligations under article 17 of the EU Trafficking Directive 2011/36/EU to ensure victims access to compensation. La Strada International’s new project Justice at Last addresses this issue.

For victims of crime, the right to compensation is internationally recognised and well established in EU legislation. Nevertheless, many barriers remain that prevent these victims from actually accessing this right. Evidence obtained from earlier research shows that very few victims seek compensation, and that among those who do, even fewer receive a compensation payment.

Obstacles to accessing and obtaining compensation include a lack of awareness among police and the judicial system, lack of access to legal aid and adequate information for victims, and the postponement of trials and long duration of criminal and civil proceedings. Another obstacle, in the case of foreign victims, is the return or deportation to their country of origin before a verdict is reached. Even when compensation has been ordered, barriers exist that leave victims without payment. These barriers include that victims rarely have the means to ensure the compensation order is enforced. But also that the perpetrators are not found, are not prosecuted, have moved their assets abroad, or have declared themselves bankrupt to avoid confiscation of their assets and having to pay compensation. Access to State compensation funds may be hindered as well, for instance due to a lack of residence status, lack of information, lack of means, and lack of access to legal aid. In short, many barriers prevent victims from claiming and obtaining their rights, including the right to compensation.

Project activities include the identification and legal analysis of compensation claims; assessment of gaps related to victims’ needs, referral, and receipt and payment of claims; international and national trainings, seminars and focus group meetings for professionals on claiming compensation; and a European information campaign to promote compensation to reach victims of crime and other groups; and the establishment of interactive online resource centre.

This project is partly funded by the European Union’s Justice Program (2014-2020).

The content of this website represents the views of the author only and is his/her sole responsibility. The European Commission does not accept any responsibility for use that may be made of the information it contains.

Your ticket for the: Justice at last